Encore Viewing: Bobcats in the U.S. and Abroad: Alumni Impact in Global Communities 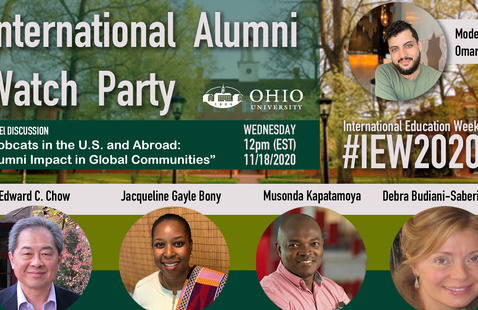 In case you couldn’t watch during the Homecoming Week Panel event, we welcome you to join us on Wednesday, November 18, 2020 at 12 Noon, Eastern Standard Time, to enjoy the encore presentation through a watch party!

The original Panel discussion, Bobcats in the U.S. and Abroad – Alumni Impact in Global Communities, was hosted on October 8, 2020 and coordinated by the Ohio University Alumni Association, Office of Global Studies, and Center for International Studies.

Join us for this special viewing party of the dynamic conversation as part of the International Education Week (IEW) celebration.

About the Original Event:

“Bobcats in the U.S. and Abroad – Alumni Impact in Global Communities.” A panel of international alumni who are either in the U.S. or abroad will share how they are giving back and making an impact in their communities. They will also discuss how their time at Ohio University has helped to prepare them to do so.

Omar Kurdi is currently an Associate Humanitarian Affairs Officer with the United Nations Office for the Coordination of Humanitarian Affairs (UN OCHA). Stationed at UN headquarters in NYC, and part of the Policy Advice and Planning Section at OCHA, Omar works as part of a global thematic team focusing on Humanitarian Access. Before joining the UN, Omar worked at the Islamic Military Counter Terrorism Coalition (IMCTC) , the Saudi Arabian Ministry of Media, Paris 3 - La Sorbonne Nouvelle, the Permanent Mission of the Kingdom of Saudi Arabia to the UN in Geneva, the Carter Center in Atlanta, GA and at Amnesty International USA in Washington, DC. Omar graduated from Sciences Po Paris with a Masters in International Security with concentrations in Diplomacy and the Middle East.

Jacqueline Gayle Bony joined the U.S. Foreign Service in 2016 as a Health Development Officer for the U.S. Agency for International Development (USAID). In this role, she advances U.S. foreign assistance goals through maternal and child health programs around the world. Currently posted to USAID/Ghana, she oversees programs that strengthen the delivery of health and social welfare services in the West African country. She started her public health career in 2001 as a U.S. Peace Corps volunteer working with South African primary school teachers to address the impacts of AIDS on students and their families early in the country’s epidemic. She then spent several years developing and managing public health programs for non-profits and the U.S. government, which allowed her to work and live across sub-Saharan Africa including Tanzania, Madagascar, Rwanda, Uganda, and Mozambique. Ms. Bony speaks French and earned a bachelor’s degree from Clark Atlanta, a historically black university, and a master’s degree in International Affairs from Ohio University. Born and raised in South Florida, her parents immigrated to the region from Jamaica in the 1970s.

Edward C. Chow is an international energy expert with more than 40 years of industry experience working in Asia, Middle East, Africa, South America, Europe, Russia, Black Sea and Caspian regions. He negotiated successfully multibillion-dollar oil and gas agreements and specializes in investments in emerging economies. He has developed government policy and business strategy while advising governments, international financial institutions, major oil companies, and leading multinational corporations. He worked for 20 years at Chevron Corporation in headquarter and overseas assignments. He taught at Georgetown and George Washington universities and served as visiting professor at Fudan University in Shanghai. He is a senior associate in the Center for Strategic and International Studies and affiliate faculty in George Mason University.

Chow graduated from Ohio University with B.A. in economics and government in 1971 and M.A. in international affairs in 1972. He was Glidden visiting professor in Athens during 2017-18 academic year. He was born in Shanghai and grew up in Hong Kong.

Debra Budiani-Saberi, Ph.D. is a Medical Anthropologist, the Executive Director and Founder of the Coalition for Organ-Failure Solutions and Visiting Research Associate Center for Bioethics at the University of Pennsylvania.

She has conducted extensive research related to organ trafficking beginning in 1999 as a part of her study on refugee health. Her work has included an analysis of key stakeholders and actors involved in the organ trade including victims, recipients, medical professionals, religious clerics, laboratories, and the state. She has conducted extensive follow-up studies on health, economic, social and psychological consequences and, with the COFS team, established COFS prevention and outreach programs. She has provided consultation on organ trafficking to the World Health Organization, the United Nations Office of Drugs and Crime (UNODC) and has worked in alliance with various medical and civil society organizations to combat the organ trade. She has been an invited lecturer in numerous universities in the U.S., Europe, the Middle East and Asia, has published in medical and social science journals and appeared on numerous radio and television programs including the Wall Street Journal, CBS, Bloomberg News, British Medical Journal News, and China Public Radio.

Musonda Kapatamoyo is a Professor and Chair of the Mass Communications department at Southern Illinois University Edwardsville, USA. He has a PhD in Telecommunications from Ohio University, MBA in Business Analytics from Southern Illinois University Edwardsville and bachelor’s degree from the University of Zambia. As Chair, he leads in implementing the department's and university's visions and strategies to improve student outcomes. Musonda teaches a variety of courses in data analytics, web applications, animation, mobile application design, and content management systems.

His research encompasses big data and analytics, algorithmic discrimination, ICT policy and ICT education. He has presented his research at various international conferences in Africa, Europe, North and South America. He has published several academic journals and book chapters. Musonda is very active in community service through the Edwardsville Rotary Club. He is a member of several boards including the Lynne F. Solon Foundation for children with disabilities.

Musonda is an avid traveler and connoisseur of cultures. He is fluent in 3 African languages, English and smidgen of Spanish.