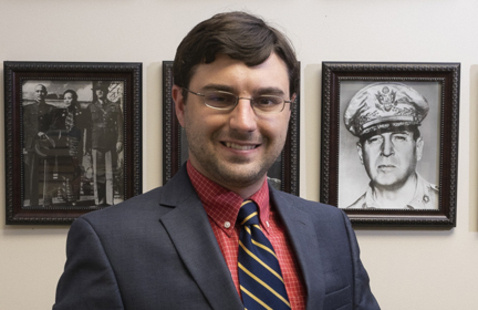 Lovelace earned a B.A. from Messiah College in 2011, an M.A. from George Washington University in 2013, and a Ph.D. in History and a Certificate in Contemporary History from Ohio University in 2020. His research interests focus on strategy, command in war, military-media relations, and World War II. His first book, The Media Offensive: How Real News, Fake News, and Public Opinion Shaped Allied Strategy during World War II, is scheduled for publication by the University Press of Kansas in the spring of 2022.

Casey, professor of international history at the London School of Economics and Political Science since 2001, is a specialist in U.S. foreign policy. His book The War Beat, Europe: The American Media at War against Nazi Germany (Oxford University Press, 2017) won the American Journalism Historians Association 2018 book of the year, the panel judging it “a landmark work for scholars, an engaging and compelling account of journalists dedicated to reporting the Allied campaigns to dislodge the German forces from Europe.” The companion volume, The War Beat, Pacific: The American Media at War against Japan, was also published by Oxford University Press in 2021.

Casey studied for his undergraduate degree at the University of East Anglia before moving to Oxford where he completed an M.Phil and then D. Phil in International Relations. Between 1998 and 2001, he was a Junior Research Fellow in Politics at Trinity College, Oxford.