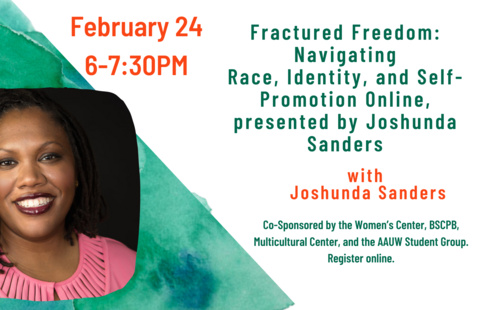 Co-Sponsored by the Women’s Center, BSCPB, Multicultural Center, and the AAUW Student Group.

Freedom is a lofty goal for many of us and an unattainable one for most. This is most evident when feminists across genders express, share and promote themselves online. While we are free to do so, navigating the challenges—including trolls, mansplaining and pushback—is part of what comes with that freedom.

Joshunda Sanders is an author and proud Bronx native. She was the recipient of a Hedgebrook Residency in 2017. Her work has appeared in the Bellevue Literary Review, Teen Vogue, Salon, Publishers Weekly, Bitch Magazine, Gawker, The Week, The UTNE Reader, Kirkus Reviews, on NPR and in dozens of anthologies, newspapers, magazines, websites, textbooks and encyclopedias. She gave a TED talk in 2013, the same year she presented at South by Southwest Interactive. Her publications include: Single & Happy: The Party of Ones, How Racism and Sexism Killed Traditional Media: Why the Future of Journalism Depends on Women and People of Color, the novella, All City and a memoir, The Beautiful Darkness: A Handbook for Orphans. She is writing a sequel to All City & a collection of short stories & a work of historical fiction. She lives in New York City.

Register by February 22 at 11:59PM. You will receive an email on February 23 with the link to participate via Microsoft Teams.