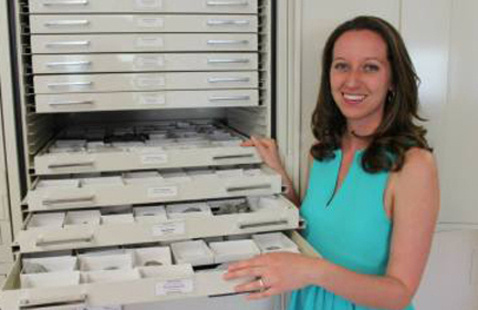 Lam is a Presidential Diversity Postdoctoral Fellow in the Department of Geological Sciences and Environmental Studies at Binghamton University SUNY.

An Ohio University alumna, she earned an M.S. in Geology in 2015, with Dr. Alycia Stigall as her adviser.

Abstract: The Kuroshio Current Extension (KCE) is the major northwest Pacific Ocean western boundary current as part of the North Pacific Subtropical Gyre. This region is home to some of the highest biodiversity in our world ocean today, likely due to increased nutrient supplies and the presence of a strong ecotone. This high biodiversity sustains Japan’s fishing industry, and supplies food for millions of people around the world. In addition, the current plays a large role in dispersal dynamics of marine organisms, such as the Japanese eel, and may be an area that promotes speciation. Today, the KCE is warming and shifting northward under increasing atmospheric carbon dioxide levels. However, it is currently unknown to what extent the current can shift north, how warm it can become and the rate of warming, and how these factors will affect marine organisms living in the current. To help begin to answer these questions, this study reconstructed the behavior of the KCE during the Pliocene (5–2.5 Ma), a time of tectonic gateway closure and climate shifts, when atmospheric CO2 levels were similar to today. Using stable isotopic analyses from surface-dwelling planktic foraminifera from three Ocean Drilling Program sites that lie across the modern-day position of the KCE, we find that the current was highly sensitive to major global warming and cooling events. We also identify eight times at which the current underwent major latitudinal shifts. These data, combined with planktic foraminiferal diversity indices, suggest that a changing KCE through the Pliocene may have had a big effect on marine plankton through time.