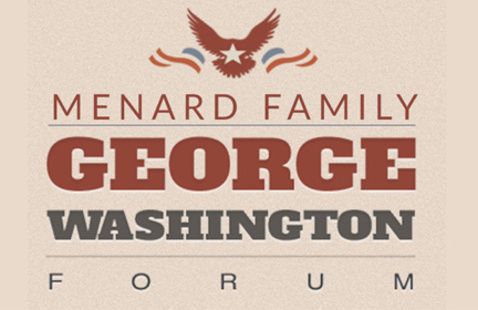 The Menard Family George Washington Forum hosts "Liberal Democracy and the Age of Revolution" on Feb. 19-20 from 8:30 a.m. to 5:30 p.m. in the Baker Center, Multicultural Center Conference Room.

Abstract: Benjamin Constant famously argued that the great achievement of what we now call the Age of Revolution was “representative government” and that “this form of government, the only one in the shelter of which we could find some freedom and peace today, was totally unknown to the free nations of antiquity.” It has been commonplace ever since to claim that many of the fundamental ideas and institutions that we associate with modern representative democracy emerged from the revolutionary upheavals of the later 18th century.

This conference and its subsequent volume aim to look afresh at the story of liberal democracy’s origins in the Age of Revolution spanning from the Seven Years’ War to the fall of Napoleon (c. 1760–1815). Did the ideas and institutions of liberal democracy actually emerge during the Age of Revolution? If so, how and why? Were they the product of long-term developments that came to fruition during the revolutionary era? Or were they generated by and amid the conflicts, debates, and upheavals of the period itself? Given that most of the era’s revolutions and uprisings were ultimately either contained or defeated, is it justified to contend that the Age of Revolution witnessed the birth of liberal-democratic ideas and institutions? If not, then what connection is there between the revolutionary turmoil of the later eighteenth and early nineteenth centuries and the eventual development of liberal democracy in the West and beyond over the next two centuries?