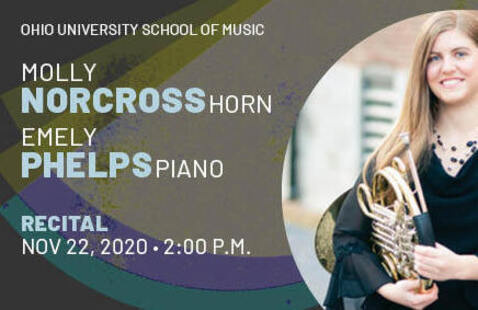 Join us for a performance by Molly Norcross on horn and Emely Phelps on piano to include the following pieces:

Andrea Clearfield: "Songs of the Wolf"

Hailed by Alan Kozinn in The New York Times as giving “a magnificent performance: precise, passionate, and supple,” Molly Norcross was pleased to join the Cincinnati Symphony Orchestra as the Assistant Principal/Utility horn in the fall of 2019. She has been performing as Acting Associate Principal since then and will continue through the ’20-’21 season. She also enjoys performing as Principal Horn of the New Hampshire Music Festival Orchestra in the summer months.

Previously she held the positions of Principal Horn in the Fort Worth Symphony Orchestra for four seasons, and Third/Associate Principal Horn in the San Antonio Symphony for three seasons. She has had the privilege of performing as guest Principal Horn with the New York Philharmonic, Utah Symphony, St. Paul Chamber Orchestra, and Naples Philharmonic (FL). A native Pennsylvanian, she especially welcomes frequent performances with her “hometown” Philadelphia Orchestra and can be seen as a substitute with many orchestras around the country.

Ms. Norcross has performed solo concertos with the Fort Worth Symphony Orchestra, New Hampshire Music Festival, Music Academy of the West Festival Orchestra, Juilliard Orchestra, and New Juilliard Ensemble, and has given solo recitals in cities all across the world, from New York to Taipei, where she often uses works written for the lesser-known Wagner tuba and the natural horn.

She has been a participant in numerous summer festivals including the Tanglewood Music Center, Music Academy of the West, Lucerne Festival Academy in Lucerne, Switzerland, and the Norfolk and Sarasota Chamber Music Festivals.

Her enthusiasm for collaboration has been shared with wind and brass quintets of the Cincinnati Symphony most recently, as well as numerous performances with Basically Beethoven Festival, Spectrum Chamber Music Society and Wedgewood Chamber Music Series in the Dallas/Fort Worth area, and the Music in the Mountains series in the New Hampshire lakes region.

An avid traveler, her recent jaunts have included backpacking in the Grand Canyon and two weeks exploring Iceland. She enjoys cycling and cooking in her spare time and has magical horn powers that soothe her nephew to sleep when nothing else will.