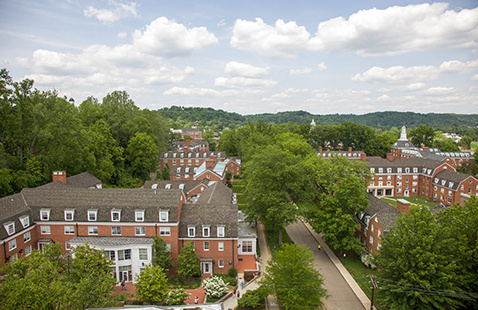 We are excited to launch the Pan African Movie Series, a platform for conversation and dialogue examining the global Black Cinema experience using different lenses and audiences. This will be an interactive series consisting of virtual panels with OHIO alumni, students, faculty and other relevant authorities on the Black movie experiences. To kick off the series, join us for a discussion of the movie “Coming to America.”

Vanessa Bell Calloway
Vanessa has earned eight NAACP Image Award nominations. She won the NAACP Theater Award for Best Actress for her role as Zora Neale Hurston in her one-woman critically-acclaimed play “Letters From Zora”. Vanessa was invited to become a 2018 member of the Academy of Motion Pictures Arts and Sciences for her contribution to the entertainment industry. She reprised her role as Princess Imani Izzi in the soon to be released “Coming To America 2." Calloway is currently starring in Bounce TV’s one-hour hit-drama “Saint & Sinners,” as the matriarch Lady Ella now in its fifth season. She directed a few of the episodes as well and just completed directing a movie short for BET HER health initiative, “A Long Look In The Mirror,” which will be seen later this year.

Yaphet Jackman
Yaphet Jackman is a Brooklyn born, Guyanese bred multifaceted creative with a passion to learn, laugh & live. Coupled with 20 years of experience in the media and television industry across the Caribbean and the US, he's worked his way up from a part-time camera operator to a budding Cinematographer/Director currently immersing himself in the U.S. film industry.

Joe 'Jody' Williams
Jody's expertise behind the camera began as a film loader fresh out of film school on the movie Telling Lies in America. Throughout the years he moved up the ranks from camera assistant to operator to director of photography on one of FOX’s all-time top rated shows, Empire. His latest work Coming 2 America, for Paramount Pictures, can be seen on Amazon this Christmas.

You will receive a confirmation email upon registration that will include details on how to join this virtual event.

If you have any questions, please email Bose Maposa at maposa@ohio.edu.