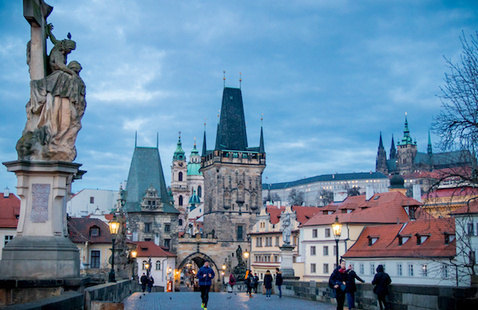 The Prague Trail for Peace and Non-Violent Resistance runs through places connected to the lives of people who, without violence, have defended life and human rights against dehumanizing evil, fear and indifference. The Peace Trail is a tourist trail of a kind. It has a beginning and an end, can be walked is a single day (20 km) with the option of taking public transport. Creators of the Prague Peace Trail will guide you along a section of the trail by walking and using some public transportation. Learn about the significance of all people mentioned in the context of Czech history and politics. This tour will include portions of the Prague neighborhoods Zizkov, Vinohrady, Nove Mesto, and Letna, which are some of the most popular neighborhoods for univesrity students in Prague, each with their own unique culture.

This ayschronous experience is led by Prague Peace Trail co-creator, Ondřej Skovajsa, Ph.D, Faculty of the Arts at Charles University (ECES) in Prague, Czech Republic. Dr. Skovajsa completed his graduate and post-graduate work in American, Czech, and Comparative Literature at Charles University in Prague. As an interpreter and translator, he placed Walt Whitman and Henry Miller and the concept of orality at the center of his scholarly attention. Between 2010 and 2015, Dr. Skovajsa worked as an assistant professor of English at Purkyně University, Ústí nad Labem. He spent the academic year 2011/2012 in the United States on a Fulbright scholarship at the University of California, Santa Cruz. Since 2008 he has been teaching courses for foreign students at the Faculty of Arts of Charles University in the framework of the East and Central European Studies program, where he now teaches courses titled “From Thoreau to Havel: Chapters in Czech and American Struggle for Social Justice” and “Politics of Song: From Folklore to Hip-Hop”. He is the author of a monograph, Written Voice (Psaný hlas , Malvern, 2015) and translations of Whitman’s 1855 edition of Leaves of Grass (2018) and Henry Miller’s Essays (2011). He is also the main author of a public history project, Prague Peace Trail (2019). During the past four years, Dr. Skovajsa has been pursuing research in ethnomusicology, collecting and analyzing Moravian, Slovakian and Roma folksongs and studying them from the vantage point of memory, introducing the concept of mnemopoetics. During the current pandemic, he is translating the UN’s Handbook on Restorative Justice Programmes (2020) for the Czech Institute for Restorative Justice.

The walking tour is pre-recorded and can be accessed via this link.